If you work in Australia outside the State of Victoria, you are probably taking a ‘sickie’ today. The Melbourne Cup horse race, always held on the first Tuesday of November, is popularly dubbed ‘the race that stops a nation’, but it is only officially a public holiday, so what is a good bloke to do? I reckon we will see the COVID numbers spike today in NSW as many Sydney folk crawl over to the sofa and pull up a six-pack of beer and settle down in front of the telly for the big race at 3pm local time.

However, there’s no need for such shenanigans in Japan, because November 3rd is a public holiday for the whole nation. It is Culture Day Day (文化の日, Bunka no Hi) and the intention is to “love freedom and peace and promote culture.”

Expect good weather, as Culture Day is statistically one of the clearest days of the year. Between 1965 and 1996, there were only three years with rain occurring in Tokyo on Culture Day! Museum entrances are free of charge on this day.

Festivities typically include art exhibitions, parades, and award ceremonies for distinguished artists and scholars. In recent years, world-renowned conductor Seiji Ozawa, leading architect Tadao Ando, and famous fashion designer Issey Miyake have all been honored. But the awards are not restricted to Japanese citizens and, for instance, the Apollo 11 astronauts were awarded upon their successful return from the moon.

“Perceive that which cannot be seen with the eye,” Musashi Miyamoto, one of Japan’s most beloved and respected historical figures, once said, and if there was a day to think about these words a bit more profoundly, it would be no other but today.

November 3 was first celebrated as holiday in 1868, when it was called Tenchō-setsu (天長節), held in honor of the birthday of the reigning Emperor of the time, Emperor Meiji. 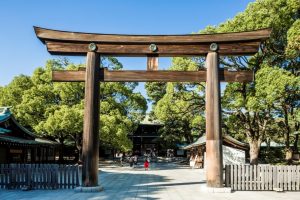 Meiji Jingu Shrine was built in dedication to Emperor Meiji and his wife, Empress Shoken.

Hakone in Kanagawa Prefecture holds the annual Feudal Lord’s Parade (箱根大名行列, Hakone Daimyō Gyōretsu) to exhibit Edo period clothing and costumes, where a total of 170 people march over 6 km dressed up like Edo samurai and princesses. This procession represents an interesting system established during this era, where the Daimyo (lords) were obliged by the General Tokugawa to travel back and forth between Edo and their territories with an intention to financially weaken them in an effort to prevent an uprising.