Awal Muharram, the beginning of the new Hijrah year, is a historic occasion for Muslims around the world. While traditions for Awal Muharram will vary from country to country, it is a public holiday in most Islamic countries, including Malaysia and Indonesia.

Mountain Day (山の日) is the newest of Japan’s public holidays, the first instance being in 2016. The legislation states that Mountain Day is intended is to provide “opportunities to get familiar with mountains and appreciate blessings from mountains”.

This day, the first full moon of the fourth month in the Burmese calendar, commemorates the Buddha’s first sermon to five monks in the Deer Park in Benares, India and the founding of the Buddhist sangha (monkhood) about 2,500 years ago.

Hari Raya Haji, meaning ‘great day of the haj’ in Malay, is the second of two Islamic holidays celebrated worldwide each year and considered the holier of the two. It honors the willingness of Ibrahim

海の日, Umi no Hi (Marine Day) honours the blessings of the oceans and economic prosperity of maritime Japan and it is normally celebrated on the third Monday in July. The date roughly coincides with the end of the 梅雨 tsuyu (rainy season) in much of the Japan mainland.

In 2020, the holiday has been rescheduled to Thursday 23 July because of the Tokyo Olympics, and with the subsequent postponement of the Olympics to 2021, Marine Day will again be celebrated on Thursday 22 July in 2021.

The day was designated as Marine Memorial Day in 1941 to commemorate the Meiji Emperor and his 1876 voyage in the Meiji Maru, pictured below, and became a holiday, Marine Day, in 1996. 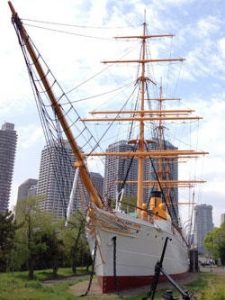 The Meiji-maru, is an iron ship (nowadays all ships are built with steel) ordered by the Meiji Government from the Napier Shipyard in Glasgow, as a lighthouse tender, completed in 1874 and navigated to Yokohama in the following year.

The ship, referred to as comparable to a first-class “hikyakubune” (a ship used for emergent matters at the time), was a luxurious state-of-the-art ship with special rooms and salons, and served as not only a lighthouse tender but also a royal ship. Emperor Meiji and many other senior officials boarded her, and she played critical roles in modern Japanese history.

Among such roles, in the territorial dispute over the Ogasawara Islands with the UK in 1875, the investigating group from the Japanese Government sailed in the Meiji-maru and arrived at Ogasawara Islands earlier than the British ship. This helped the Ogasawara Islands to be claimed as the territory of Japan. Furthermore, the later incorporation of Okinotori Island and Minami-Tori Island enabled Japan to secure an EEZ (exclusive economic zone) of 4,470,000km2 in addition to territorial waters, the 6th largest EEZ in the world. About 1,500,000km2 of this zone belongs to Ogasawara Village in Tokyo Prefecture.

Also, in 1876 when Emperor Meiji visited the Tohoku area and Hokkaido, he boarded in Aomori, called in at Hakodate and arrived at Yokohama safely on July 20. To commemorate the date, “Marine Memorial Day” was established in 1941 and it became “Marine Day”, an official holiday, in 1996.

The Meiji-maru continued to serve as a lighthouse tender for about 20 years before being transferred to the Tokyo Nautical School. From then, she, as a moored training ship, fostered more than 5,000 young mariners for about 50 years until 1945. During the Great Kanto Earthquake in 1923 and the Great Tokyo Air Raids in 1945, she provided accommodation for injured people and supported relief activities.

Many people take advantage of the holiday and summer weather to take a beach trip. Other ocean-related festivities are observed as well. Families may visit the sea and swim, snorkel, surf, or dive. People may also participate in an event called ‘mud-ball throwing’. Mud-balls are composed of “Effective Micro-organisms” (EMs), which help break-down and eliminate sea grime. National aquariums also host special water-related events on this day.

If there is one thing analysts agree on, it is that the world is in crisis; on the coronavirus, the economy and the environment. The Chinese word for crisis, Wéijī, comprises two characters, meaning ‘danger opportunity’. This is very apt for the world today. There is certainly danger from the pandemic and the harmful effect it is having on business conditions. But this does lead to opportunities in a couple of ways.

Firstly, many businesses are not going to be the same again because of the virus. The smart people have already realised that their business needs a re-boot, with a shift from physical to digital, and a much lighter cost base. Traditional office spaces, which come with high long-term fixed costs, are being re-invented as staff demand flexible ways of working, and business activities of marginal importance are either being eliminated or outsourced to trusted partners in cheaper locations. The more nimble businesses will grab a first mover advantage via the re-boot.

Secondly, there are always entrepreneurs with money, and during a crisis they are on the lookout for bargains and growth opportunities. Asia is where many of the growth opportunities will be found, and of particular interest to them is the Greater Bay Area in Southern China. The GBA infrastructure continues to be fast tracked and its GDP, which is now the size of Canada, will grow within a few years to be the size of Germany.

This is why we love Asia and we believe in Hong Kong as an important hub for the future. So, if you are looking for growth or seeking help to re-set your business, please come and talk to us at Trinity Bridge. We understand Asia and can help you on that journey.